Primary and secondary lymphedema are the two main types of lymphedema. In both cases, missing or damaged lymph vessels or lymph nodes cause a blockage of the lymphatic system. The protein-rich fluid called lymph or lymphatic fluid is unable to drain properly and collects in the tissues. This results in swelling in the affected areas.

Primary lymphedema is a rare disease that occurs when the lymphatic system has not developed adequately (or is not functioning as it should) from birth due to a genetic reason. Primary lymphedema develops as soon as the lymph vessel system can no longer cope with the strain. This usually happens in early life. It is called 'primary' because the impairment is not due to a ‘secondary’ cause like an illness or an injury.

Primary lymphedema can have different causes:

There are different types of primary lymphedema and there are many known syndromes that have been linked with it, including Noonan Syndrome, Prader Willi, Yellow Nail Syndrome, and Turner Syndrome.

Secondary lymphedema is more common than primary lymphedema and is caused by another disease or an injury. The lymphedema develops either because the lymphatic system is damaged or there is too much lymph fluid that cannot be drained properly (overload).

Damages to the lymphatic system can be a result of: 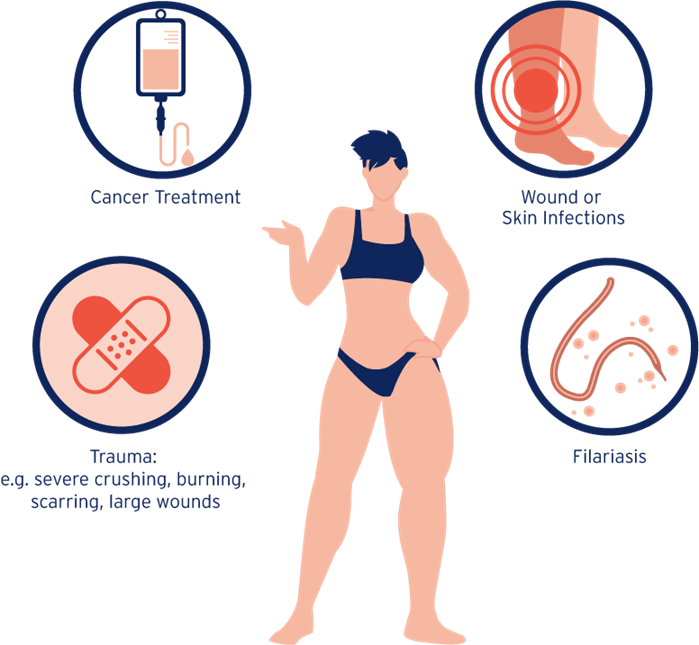 An overload of the lymphatic system can be a result of:

Diagnosed and Looking for Help?

And get helpful tips

Learn everything about treatment

Choose the Support You Need

Discover Our Services and Get the Help You Need

Get help finding the right expert
Help and Support
Don’t sit around and go through this in silence. Share your story. Doing that was a real eye-opener for me