In the vast majority of patients with lipedema, conservative therapy with compression, exercise, weight management and, if necessary, psychosocial therapy will lead to a significant and satisfactory improvement of the symptoms. However, if you are one of persons affected who have not experienced any therapeutic success despite these measures, surgical treatment may also be considered. Thereby, it has to be distinguished between two completely different surgical procedures:

Not every patient with lipedema will benefit from liposuction. Therefore, the international panel of experts at the “European Lipedema Forum” has defined criteria that make the – long-term – therapeutic success of liposuction likely. Accordingly, liposuction should be considered in patients with lipedema if:

The aim of liposuction is to reduce the discomfort in the soft tissue. Since the physical reason of the pain is caused by a very mild (and completely harmless) inflammation in the fat tissue, local liposuction can reduce the pain. At the same time, liposuction can improve mobility by removing excessive fatty tissue from the lower extremities.

There are different techniques of liposuction, but three methods are most commonly used in the treatment of lipedema:

Classic liposuction: At the beginning of the operation, the so-called tumescent solution, which is a special solution consisting of table salt, anesthetics and adrenaline, is injected into the fat tissue. Adrenaline is a drug that causes blood vessel constriction in the fat tissue region to minimize blood loss during surgery. After a duration of action of approx. 15 minutes, the fat tissue is suctioned off using blunt metal cannulas, which are connected to a liposuction device by means of a hose and are inserted through small incisions through the skin in several places. In standard liposuction, the surgeon has to swing these cannulas back and forth with vigorous arm movements in order to mechanically reduce the fat tissue and to be able to suction it off effectively.

Vibration-supported liposuction: The only and most important difference to standard liposuction is that the blunt cannulas vibrate slightly with the help of an electric handle, so that the surgeon only has to gently move them back and forth during the operation. Therefore, this method is considered a little gentler. This technique enables surgeons to perform liposuction over a long period of time, which is why it is used primarily in the treatment of pronounced forms of lipedema. In some cases, these operations can last over three hours.

Water-jet assisted liposuction: In this surgical method, the tumescent solution is introduced using a fine jet of water. As a result, the fat tissue is mechanically shredded and immediately suctioned off with a blunt metal cannula. These cannulas do not vibrate and must also be moved vigorously back and forth by the surgeon.

Although all three liposuction methods can have advantages and disadvantages, all three are suitable for the surgical treatment of lipedema. These three techniques can deliver comparable results depending on the nature of the findings and the experience of the surgeon. It is important that the surgeon is familiar with the method, has sufficient experience and can verify that he or she has performed a large number of these operations.

After each liposuction, patients develop bruises on the skin (superficial blood effusions), swelling and pain in the treated areas. All of these three surgical side effects can vary from patient to patient and generally resolve completely within 3-4 weeks. The pain sensation is different for each patient, usually the symptoms after the operation are comparable to the pain after a severe bruise. The risks and possible complications after liposuction include inflammation, bleeding, which can lead to high blood loss, the development of thrombosis and pulmonary embolism, an allergic reaction to medication or cosmetic impairments due to the formation of dents and irregularities on the skin.

Before deciding on liposuction, you should weigh the benefits against the risks described above and possible complications. With a good selection of patients and in the hands of experienced surgeon, the complications described above occur extremely rarely. When making a decision, however, you should consider that any operation or medical treatment is associated with risks and these cannot be completely ruled out.

After liposuction for lipedema, you should initially consistently wear compression garments on the treated areas for about 6 weeks. You can usually shower after two days; of course the compression garments can be removed for this. Lymph drainage or special skin treatments, e.g. endermology, can accelerate the healing process, but these are not covered by health insurance. After the operation you will be able to move; and of course, there are certain restrictions due to the swelling and discomfort. You should pause sporting activities on the treated body regions until the symptoms have significantly improved. Usually, you should be able to lead a normal life again after about 6 weeks.

The final visual result of liposuction can only be finally assessed after approx. 4-6 months. It is extremely important that you keep your weight constant after the operation. A relevant increase in weight would lead to a deterioration in the result of the operation. For this reason, these operations are not recommended for patients who are unable to maintain their weight. Whether the lipedema symptoms are completely or only partially improved by liposuction cannot be fully guaranteed. The current study data on liposuction are very limited and insufficient. However, previous studies indicate that around 70% of patients maintain to have typical lipedema symptoms even after liposuction and that need to continue wearing compression garments. 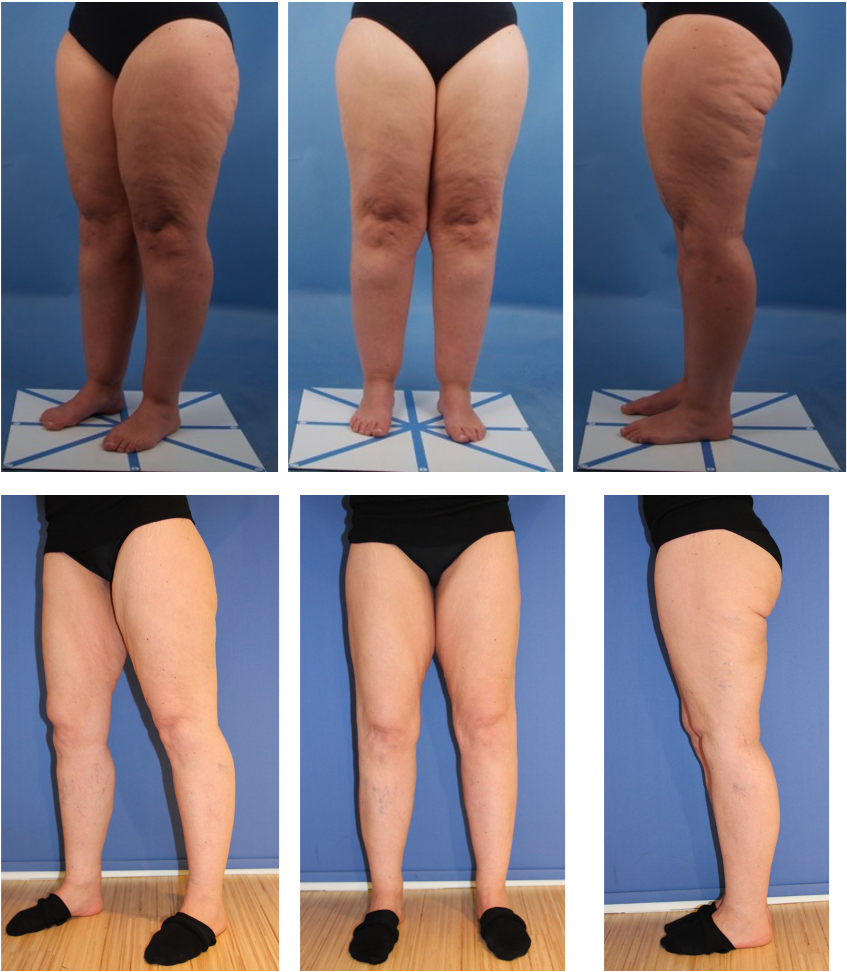 The images above show photos of a 30-year-old patient with thigh and lower leg lipedema before the operation. The photos below show the same patient 10 years after liposuction was performed on her entire thighs and lower legs. Only by choosing an appropriate patient for these operations and by maintaining the patient's weight is it possible to maintain the result of liposuction in lipedema patients in the long term (Prof Nestor Torio-Padron, MD, Clinic for Plastic Surgery, Freiburg).

Many patients with lipedema suffer from severe overweight. A BMI of 30 kg/m² or more is classified as obesity. Obesity is not a question of guilt, weakness of will or lack of discipline, but a disease recognized by the WHO and now also by the German Bundestag. If, in addition to lipedema, you also suffer from severe obesity, liposuction would no longer be a helpful treatment option; it would rather be malpractice. Instead, it should be checked whether you are eligible for bariatric surgery, i.e. for obesity surgery.

Gastric sleeve or gastric bypass surgery is particularly recommended here, as these show the best results in all studies. This option can be considered from a BMI of 35 kg/m², from a BMI of 40 kg/m² it is recommended. Conservative weight loss strategies with various diets have probably already been tried several times and often resulted in a yo-yo effect. You should therefore no longer take this path in the future. Many studies have now shown that bariatric surgery is the most effective and long-term successful treatment for losing weight. More recent studies on women with both diseases, i.e. with lipedema and severe obesity, also show a significant improvement in leg circumference (and thus lipedema) after bariatric surgery.

You can get reliable information on the various surgical techniques and other exciting facts about bariatric surgery of website http://surgery.ucla.edu/bariatrics-patient-stories 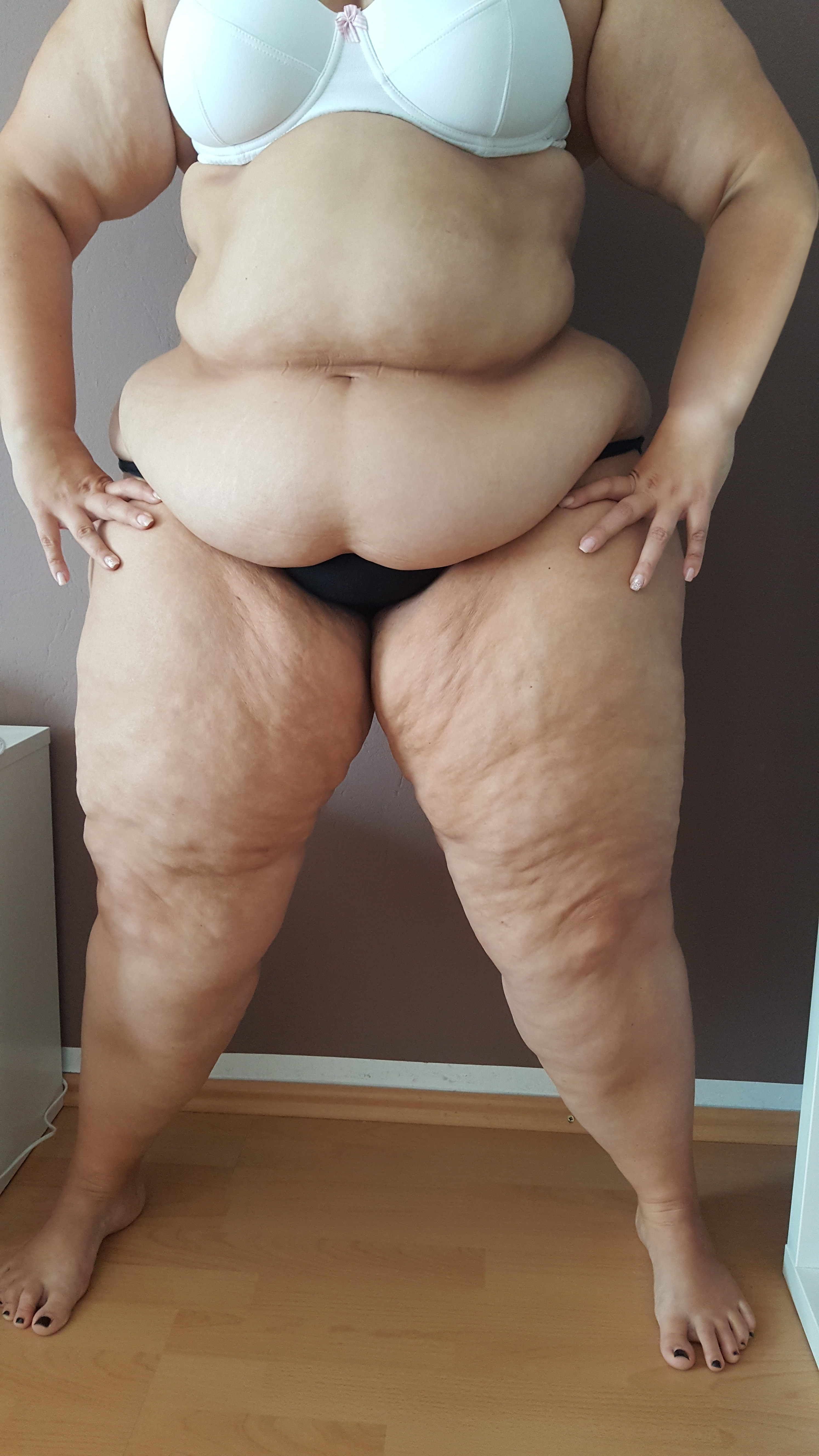 Images above illustrate the positive influence of obesity surgery on lipedema as well. There is less than a year between the two pictures. The circumference of the thigh halved, and the patient was symptom-free. A skin tightening would be possible after about a year of weight stability and could be carried out by a plastic surgeon (Tobias Bertsch, MD, PhD, Foeldi Clinic Hinterzarten, European Centre for Lymphology)

Diagnosed and Looking for Help?

And get helpful tips

Learn everything about treatment

Choose the Support You Need

Discover Our Services and Get the Help You Need

Get help finding the right expert
Help and Support
Don’t sit around and go through this in silence. Share your story. Doing that was a real eye-opener for me